San Francisco is Breaking My Heart 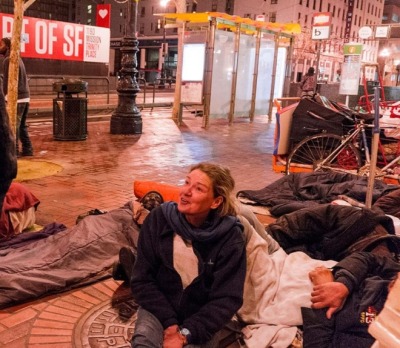 I moved from the Bay Area about five years ago to live in Michigan. However, I am still back in the Bay Area routinely working with software companies and it's breaking my heart. When I was at Zendesk I lived near our first office (510 Townsend) near Caltrain. When Zendesk moved to Market and Sixth street, it was a kind of a sketchy area at night, but I got used to the chaos of being near the Tenderloin district. There were routinely fights in the alley behind our building. I saw a woman servicing a guy in a doorway as I left work. Another time a woman ran naked screaming running down the street. Someone got shot one time late at night outside our office in what we learned was a drug deal gone bad. An employee got mugged one evening and chased the mugger, which is not really best practice, but he was Ukrainian and he didn't take shit from anyone. My wife and I were on a muni going home one evening and a guy stole the entire role of bus transfer tickets and ran off the bus. The bus driver ran after the guy. When he returned ten minutes later, he said the guy had done the same thing a week earlier.

My point of this, is there's been a homeless problem for a long time. Long time residents know that this goes back to the 1980s. Hell, maybe earlier than that. But you could walk down Market street during the day and it was okay.  Market and Sixth was crappy, and the Tenderloin was sketchy, but that was it.  The financial district was pretty good. Downtown was fine. North Beach was cool, Embarcadero was ok. I used to run along China Basin and that was fine too. If you squinted San Francisco was still a nice place.

This isn't Times Square in the 70s or Detroit in the 90s. It's far worse than that. It is epidemic.

I've been helping out a company located and Fourth and Market, one block from Moscone Convention Center. It's a shit hole. Market and Fifth is worse. Market and Sixth looks like a third world country with people selling random stuff, iphone cords, CDs, mouthwash, razors set out on a piece of carpet on the street. You can't walk down Market more than a hundred paces any time of day without finding a body on the ground. Drunk, drugged, whatever. There are tents on sidewalks, people sleeping in doorways. Human feces on the street, needles, you name it.

Today I was meeting with a colleague at Peet's on Market. It's pouring rain and a young man comes in, thin, somewhat scruffy in appearance, likely homeless, bleeding from his ear and sits near us. I offered him some ibuprofen and gave him a wad of cash. He spoke broken English and didn't seem to want either, but I left the cash in front of him. Sometimes I give homeless people food, but rarely money.

I don't know what to think of SF anymore.