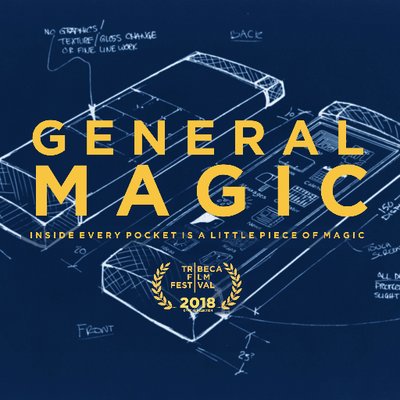 I realize I'm late to the party on this, but I happened to catch the documentary "General Magic" recently and it's an amazing piece of work. It had been on my list of films to watch since earl 2019, but somehow never bubbled up to the top. So it was fortunate that it was available on a Delta flight I had recently. For anyone who wants to understand the ups and downs of what it's like to be in a high-tech startup, this is an in-the-trenches documentary that captures startup reality better than anything else I've seen.

The film documents the rise (and fall) of Apple spinoff General Magic, a company that embarked upon the audacious goal of producing the first connected, handheld personal digital assistant (PDA), predating such devices as the HP 95 LX, Psion 3, Palm Pilot. General Magic was founded in 1989 by Marc Porat, Andy Hertzfeld and Bill Atkinson, the latter two among Apple's most famous engineers for their work on the original Apple Macintosh. The company became a hotbed of innovation and secrecy. No one quite knew what they were up to, but given the pedigree, it was going to be big. The company attracted dozens of other prominent engineers and up and comers including Susan Kare who designed the UX, Tony Fadell who went on to help create the iPod, the iPhone and Nest, Andy Rubin who created Android, Pierre Omidyar who created eBay.

The documentary includes a large quantity of historic footage. The team at General Magic knew they were working on something important and they hired a team to film all of it. So there are team meetings (bean bags on the floor), demos, late night sessions, press conferences, nerf-gun fights and more. The historic footage is interspersed with contemporary interviews with key executives, press and analysts looking back on what they accomplished and why the company failed.

It's a heartbreaking story. Here's a company with vision, financial backing, genius engineers, and a huge market opportunity and its obliterated to the point of obscurity. I doubt that today's startup engineers have even heard of General Magic, the Magic Cap operating system or any of the tools from that era. But the irony is that all of the technology became widespread within 20 years. That includes technology that later surfaced in the iPhone, Android, Twitter, Amazon. Ultimately, the people behind General Magic created multiple billion dollar technologies and arguably entirely new industries. It was the hard lessons of General Magic's failure that ultimately resulted in the triumph of its many brilliant engineers.

Having worked in the software industry since the late '80s, this film captures the essence of Silicon Valley better than anything else I've seen. It's a powerful tribute to what it takes to succeed in the valley and asks the question: is it worth it?