Home Archives Profile Subscribe
So Then I Wrote A Rock Opera
Hark: The Software Paradox

If you thought 2015 was a rough year for the financial markets, you ain't seen nothin' yet. So far, 2016 has every sign of being a full-on bear market, meaning a 20% or more decline in the major stock markets.

And no surprise, we've seen a ton of bad news for so-called Unicorns --tech companies valued at over a billion dollars. Unfortunately, many of these companies have failed to build an efficient, profitable business to maintain their lofty valuations. No surprise, companies are seeing their public and private valuations dramatically reduced. Here are a stories that have surfaced in recent months:

The point of all this bad news is that it's not just about one or two companies that have missed the mark. It's a systemic problem. And likely, we are still just seeing the early signs of what may become more common in 2016.

To be sure, there are plenty of strong companies out there whose valuations are well justified. Companies like Atlassian, Hubspot, New Relic, Zendesk all have efficient business models and disciplined growth.

But a lot of other wannabes have billion dollar private valuations that are much harder to justify. It could be that the market correction in tech is just an adjustment to valuations that were never warranted in the first place. There are lots of cool apps, devices and services out there, but it doesn't mean they are good businesses. If a company gets to $100 million in revenues and has no clear path to profitability, it's kind of a fool's errand. And many of these companies haven't even gotten that far. 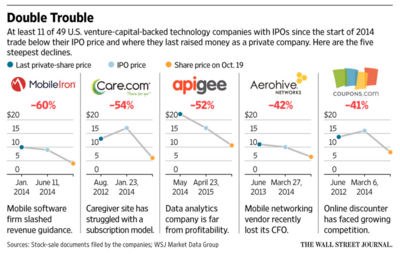 So what does this mean for startups? Basically the lofty multiples of 2010-2012 are gone. The truly great companies will still command good multiples, but only if they are converging towards profitability. The "growth at all cost" land grab strategy that inspired young companies to burn millions or tens of millions of dollars per month isn't going to be viable in the current climate.

If you're in a company with less than 12 months cash burn, you better make sure management is reducing expenses. If you don't have an increasingly efficient growth story, this is going to be a tough time to raise money, so expect a down round. If you can weather the storm without having to raise additional capital and grow back into your valuation over time, that's not a bad way to operate.