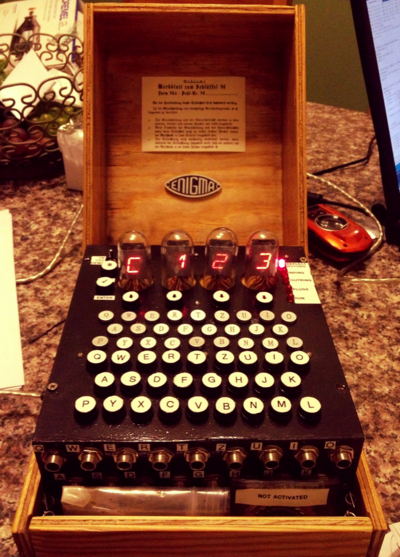 The wild and crazy guys over at S&T Geotronics, James Sanderson and Marc Tessier, have decided to go full tilt with a Kickstarter version of their DIY Open Enigma Project.  For those who missed the fanfare last year, they were featured on Instructables showing how to build an Arduino-based encryption machine that works exactly like a WWII era Enigma.  You know, the thing that Alan friggin' Turing and his team at Bletchley Park cracked to  bring an end to WWII?  Yeah, that Enigma.

and the film starring Kate Winslet

and some people I've never heard of.  That film was produced by Mick "code-breaker" Jagger.  Yeah, that Mick Jagger... By the way, Jagger owns his own personal friggin' Enigma machine.  How cool is that?

The Enigma Machine (and it's cracking) remains one of the most significant breakthroughs in computing.  And Turing is considered one of the fathers of modern computing as well as a brilliant mathematician, logician, code-breaker and... wait for it.... world class marathon runner. (I kid you not, the guy ran a 2:46 marathon, coming in 5th in an Olympic qualifying round.  Take that Nazi scum!)

But unless you happen to have a spare $208,137 lying around to throw at a Christie's auction, the closest you're ever gonna get to an Enigma machine is to view Mick Jagger's Enigma sealed behind glass at Bletchley Park.  I've been there, it's fantastic.  But it's also heavily guarded.  Just sayin'. 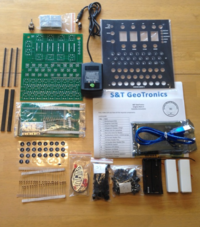 Now with the Open Enigma Project, you can get a working, life-size replica of the Enigma and be a part of computing history.  You can sponsor the Kickstarter project for as little as $5 (cheapskate), or if you're a DIY hardware hacker, for $250 you get a bag of electronic stuff you can assemble.

Or if you're a software person who wouldn't know which way to plug in a soldering iron, then you can get a fully assembled kit (without a case) for $300.  And if you want the whole enchilada including the genuine wooden case, it's $600.  Executives, VCs, rock stars and others can splurge for even higher levels to help make this project a reality.

This is literally a once-in-a-lifetime opportunity to get a working Enigma replica.  And that is some cool cyber-encrypting steampunk goodness!  You can plug the Open Enigma into your PC via USB port and run some kind of crazy distributed big data bitcoin-mining NoSQL social media photo sharing site on it.

All the hardware and software is open source so you can compute all you want on your desk, put it behind glass or run a marathon with it.  Just like Alan Turing would have done.