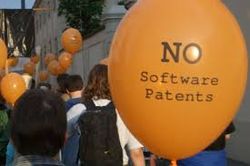 A few years back, along with some folks at MySQL and in the open source community, we helped kick off a campaign against software patents in Europe.  This was a hot topic and surprisingly, it seemed no large companies were willing to step up the fight.  As a relatively young company, MySQL had a lot to lose if someone went on the attack against us using patents.  While we had a very small number of patents in our portfolio (mostly through acquisitions), we help them only for defensive purposes.

It's been interesting to see some stories come out from NPR's Planet Money and This American Life shows that shed more light on software patents.  The first episode was aired in 2011 and cast some well needed light on the rather murky area of software patents and a company called Intellectual Ventures that appears to have accumulated a massive war chest of patents.  I've seen some of the patents and some are truly impressive.  But in many cases, it's less clear how these patents benefit society.

"We're at a point in the state of intellectual property where existing patents probably cover every behavior that's happening on the Internet or our mobile phones today," says Chris Sacca, the venture capitalist. "The average Silicon Valley start-up or even medium sized company, no matter how truly innovative they are, I have no doubt that aspects of what they're doing violate patents right now. And that's what's fundamentally broken about this system right now."

The second episode, aired in 2013, went even further in disclosing the money that is being made by Intellectual Ventures through a licensee called Oasis for rather dubious claims around internet backup technology.

It's unknown how much money Oasis received from those licensing arrangements. We do know how much it wanted from Carbonite. Danielle Sheer said Oasis proposed a $20 million license fee plus a portion of revenue going forward.

Tom Ewing, an intellectual property lawyer who studies patent infringement cases, says, assuming Oasis was asking for settlements in rough proportion to the size of the company being targeted, a pretty good estimate of its total take "might be in excess of $100 million..."

It's a fascinating story and illustrates just how out of control the patent system has become.