I managed to get an "early upgrade" of my iPhone 3GS to the iPhone 4 despite AT&T's best efforts.  I've had a couple of days using the new iOS 4 operating system on my 3GS and a couple of hours with the iPhone 4.  So here are a few highlights of the initial hands-on experience with more updates on the weekend.

Here's a gallery of additional photos from the iPhone 4:
(Double click to see larger versions.)

Other than AT&T's longstanding inability to deal with demand, the upgrade process is pretty simple.   I chased the UPS driver home to get my iPhone today and just plugged into the USB cable to restore my last iPhone 3GS backup.  That took about 20 minutes.  Applications, data, settings etc were exactly where I left them. However, since I manually manage my MP3 files, it didn't restore those, which is kind of a nuisance.  You also need to re-enter email and WiFi passwords, which makes sense.  During the upgrade process you can sign up for a 60 day trial of MobileMe, which is tempting if you own an iPad and iPhone.  And you also need to re-activate the account by calling a toll-free somewhat-automated AT&T service.  My hold time was just over 3 minutes and then it took another few minutes to go through the terms and conditions.  In fact, I had to type or say my cell number 3 times, zip code twice and agree to the terms twice.  All told it took about 10 minutes. But considering it's AT&T, it could have been worse.

But then a few minutes after syncing, I noticed that not all of my applications were restored. The New York Times, Frotz, Wikipanion, Engadget, Guitar Tab Toolkit and several others apps were missing.  Not quite sure why.  So I plugged in the USB cable a second time, canceled the backup and suddenly the remaining apps were being restored.  That took another 20 minutes.  Not sure if I did something wrong here or the iTunes Store was overloaded.  But if some of your apps aren't restored initially, don't panic.  But if this happens you'll also have to re-arrange the app icons back to how you used to have them.

Better battery life, better screen, better audio, better camera and for those who actually need to talk on their phone, better cellular coverage.  Admittedly, it's still AT&T, but I believe the new antennae built into the casing will help. On my 3GS, I've had calls drop 4 or 5 times while driving on 280 (which has a black-hole for cell service near Sand Hill Road.)  But so far, so good.

The iPhone 4 is slightly skinnier than it's predecessor, and a bit more squared off, but to me the differences are subtle.  Its the same weight and doesn't really feel much thinner, not that that was an issue.  If you had a third-party case for your old iPhone it may or may not fit the new one, depending on how snug it was to begin with.  My old soft rubberized case seems to hang a bit loose, like pants a size too large, but it's not far off. If you're into design then yes, the iPhone 4 has got a modern-retro cool style.  But to me it's not a big deal.

The new screen is better, but again, it's a fairly subtle improvement. However web sites with small fonts, like the mobile version of TechCrunch, are definitely more readable.  And even existing built-in apps benefit from the higher res fonts.  In side by side comparison, the new screen is sharper and seems to have better contrast, making it easier to read.  For news applications, it's almost like reading a printed magazine, albeit a very small, fussy one.

Similarly, performance is a little faster for some apps.  For example, Google maps screen refresh is noticeably snappier than before.  And in side by side comparisons, for example, updating stories from the New York Times or AllThingsD, the iPhone 4 is consistently faster. Not a lot faster, and not in itself enough to make a huge fuss about, but I'll take it.

The camera, on the other hand, is noticeably improved.  I often end up at conferences panels or blues clubs where I don't always have my trusty Canon G9.  In these cases, the lighting conditions are never ideal and as a result, the iPhone 3GS camera just doesn't cut it.  And in my experience, the 3GS video was completely useless as any volume of live music (say 100 db, which is loud but doesn't require earplugs) gets clipped and distorted by the built-in microphone.

The iPhone 4's camera is much improved. The pictures are high-res (5 mb versus 3) but the real improvement comes from being more sensitive in low light conditions.  The iPhone 4 also has a front VGA (640x480) low-res camera used by the FaceTime video conference call app that is also suitable for quick self-portraits with less fumbling around.  While the camera isn't perfect, it's miles better than the 3GS and can match low-end point and shoot or Flip video cameras. I've posted two photos in crappy lighting and the iPhone 4 makes a decent job of it. 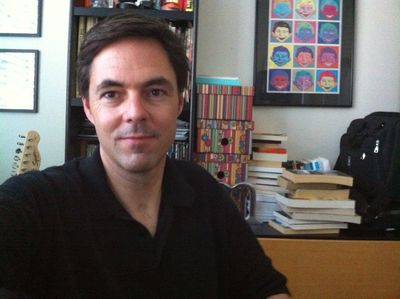 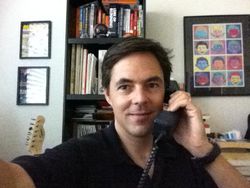 The video is ok in low-light but the result is a very grainy image, almost on par with the latest Flip video camera, but not really comparable to a high-end point and shoot camera such as the Canon G9.  But it is definitely much better than the iPhone 3GS and more convenient than carrying an iPhone and a Flip. Here's a quick and dirty use of the low-res VGA video capability:

(My apologies for the guitar playing!)

And some live concert footage at about 100db:

The audio is definitely better than the 3GS, but the picture is very grainy.

In fact, as the video at the top of the post demonstrates, I was able to make continuous calls on several notorious silicon valley dead spots, including Highway 280 near Sand Hill Rd and Highway 17 to Santa Cruz.  However, I did lose reception in a tunnel (to be expected), on the Bay Bridge and on rural Highway 9 in Saratoga. But this was still fewer dropped calls than usual.

If you've been frustrated by dropped calls with the 3GS, this improvement alone may be worth the upgrade price.

The speaker is also slightly clearer which is useful if you do conference calls or play music from the speaker (which I do on occasion.)

The new iOS 4 is good on the 3GS but it really rocks on the new hardware.  Not only is the multi-tasking quick, but the better hardware makes even existing applications look better and run faster.  Hopefully in the weeks to follow we'll see more applications updated to use the new multi-tasking.

Note that the multi-tasking on the iPhone is not the same kind of flat-out full-on multi-tasking you may be used to on a desktop compute.  It's really more of an intelligent quick-restore of an application with some limited multi-tasking for maintaining cell connection, playing music, getting notifications etc.  On a handset, this seems to work fine.  It's not like I need a massive spreadsheet to recalc or some kind of long-running DBMS transactions to go run in separate threads.  But we'll see in the fall whether this same model works as well on the iPad.

Nonetheless, the multi-tasking, is a intuitive as you could imagine.  Double click the iPhone button below the screen to pull up your recent or running applications.  So you don't have to go back through the home screen and scroll through pages of apps when you, say, confirm a calendar appointment in an email while talking on the phone and looking at a map.  It's not as good as multiple desktop apps on the screen at once, but the experience works well on the small screen of a smartphone.ns.

Some of the built-in apps are also improved.  For example, iPhone email now has a unified in-box and threaded conversations. With a unified in-box, I can now finally start to move off hotmail and over to gmail without having to manually check email in two places.

You can also now run the iBooks application on the iPhone with bookmarks and content synchronized. If you're happy with your 3GS and just want multi-tasking and a unified email inbox with threaded messages, and iBooks, you can get all of that with an upgrade to the iOS 4 platform for free.

Apple has also introduced FaceTime an iPhone4-to-iPhone4 video conference call capability. Unfortunately, it runs only over WiFi.  Still, it could be a useful application for those who travel a lot.

Overall, iPhone 4 is an incremental improvement.  I am not sure whether I would label it game changing; that depends on how much you use FaceTime, iMovie or other new applications that have yet to be created.  But it is certainly a worthwhile upgrade, just to get the improved battery life, camera and cellular reception.  But if you do the upgrade, note that it can take about an hour to backup your old phone, restore on the new one and activate the account with AT&T.  Don't attempt this if you need to use the new phone in 10 minutes.

If you can get the subsidized price or early upgrade and can live with AT&T, then it's $200 well spent. Otherwise, you may have to wait for Verizon to pick it up next year.

With the iPhone 4, Apple has once again set and raised the bar.

I just found a link to new "hidden" features in iPhone OS4!
http://www.mypixplace.info/iphone.htm