eReaders and the Danger of Price Wars 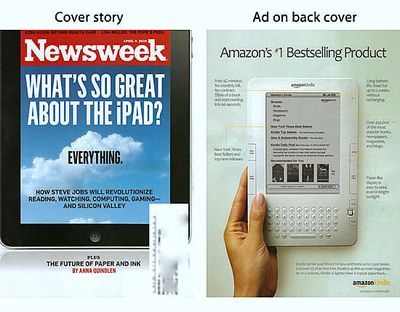 A longer version of this story is published at www.opensources.com

Last week, Barnes & Noble announced they would cut the price on their wireless Nook eReader, from $259 to $199 ($149 for a new WiFi-only edition.)  Many thought this was a good opportunity for the third place contender to gain market share.  But within a few hours Amazon beat Barnes & Noble's price by $10, marking down the Kindle 2

As the New York Times notes:

The price cuts were made as manufacturers of e-readers faced a mounting threat from Apple’s iPad. Even though it is far more expensive than the e-readers, the iPad, which starts at $500, performs a range of functions with a versatile, colorful display that contrasts sharply with the static, monochrome screen of e-book readers. Apple said it sold more than two million iPads in the two months since the tablet’s introduction... Analysts had expected the prices of e-readers would gradually fall because of the natural decline in component costs and the increased profitability of e-books themselves.

The price cuts should add further momentum to what, despite incursions by the iPad, has been a growing market for dedicated e-reading devices. Amazon and its rivals are on pace to sell 6.6 million e-reading devices this year, up from 3.1 million in 2009, according to Forrester.

If Amazon, Barnes & Noble, Sony et al manage to sell 6 million eReaders this year, that would be impressive growth for a category that has been lackluster to date.  Amazon has never broken out sales of it's Kindle line, but by all appearances it's the leading standalone eReader and likely has sold a couple of million units in its three year history.

In comparison, Apple has sold more than 3 million iPads in its first 80 days. And they're expanding into 9 more countries next month.  Analysts are predicting that the iPad could sell between 5 and 10 million units this year, which blows Amazon's Kindle out of the water.  And unlike Amazon, Apple actually makes money with it's iPad since it's costs are around $260 for the $499 entry level product and margins improve on the higher end units.

But its worth considering a few questions:

The key point here is that price is just one part of a disruptive strategy.  No doubt, part of the success of MySQL, Red Hat, jBoss, Alfresco, Zimbra, Pentaho, Revolution Analytics et al, comes from delivering 90% of the benefit for 10% of the price of incumbents. The trick is do to do in a manner that is profitable but that incumbents cannot respond to because of their higher cost of operations.  (And remember, most open source users don't pay anything!)

Read a longer version of this story at www.opensources.com

I'm sorry, but I think you're comparing apples to oranges. Apple imho is winning market not because of the open source or free availability, but because of the fact that it servers a completely different and much broader market than the other e-readers.
This is so typical Apple : take only one of the features and they're not impressive (or even worse than competitors like e.g. the famous cut-n-paste on the iphone). But the package is balanced so well, that it makes up for the imperfection of the individual components.

I wonder whether it's 100% correct to say that "...unlike Amazon, Apple actually makes money with it's iPad".

I mean, sure, Amazon may not have as large a margin on the Kindle (or it may even cost them money for all I know), a major point to consider is that the Kindle provides a platform to do direct advertising for Amazon ebooks.

The products discussed here are neither low-end or new-market disruptors. It's possible to have an e-reader (with eInk) be disruptive (in both ways, which I find is by far the best hope for success), but noone appears to have done this so far.
Instead they all go for bloody head-on competition on extensive feature sets and now also lower prices. Fail, in my opinion.

Joro,
that's actually my point, but perhaps you have made it more clearly than I have. Apple has figured out the right feature set for a segment of the population and they are able to pursue this in a profitable fashion.

Roland,
at these prices (and actually according to insiders, even at their earlier prices) Amazon and B&N were losing money on the hardware.

That may be part of their overall strategy, but it's a risky play. And its often the case companies get into trouble with such an approach. In this case, Amazon certainly has the cash to subsidize a money-losing hardware operation. It's not clear that B&N does. And for startups, it's almost never the case.