Management Secrets of the Grateful Dead 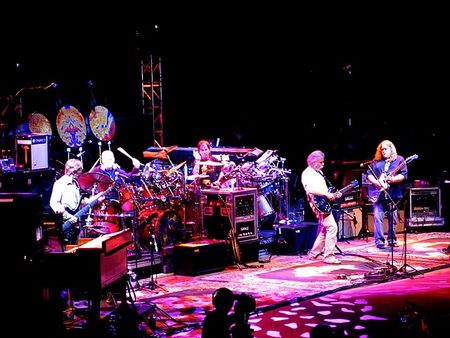 I'm not the biggest deadhead around --I've seen way fewer dead shows than top-ranked VCs I know. But I've always admired the way the Grateful Dead cultivated their fan base.  While they really only had one hit record over a career of more than 30 years, they had a cult-like following thanks to their constant touring and a novel approach to live concert recordings.

The Atlantic has recently published an article called "Management Secrets of the Grateful Dead" which covers some of the main points of how the dead grew their audience.  In a model that was prescient to open source software and internet startups, they did so by giving away their core product.  The dead were one of the first bands to not only allow, but to encourage, fans to tape concerts and give away recordings:

Much of the talk about “Internet business models” presupposes that they are blindingly new and different. But the connection between the Internet and the Dead’s business model was made 15 years ago by the band’s lyricist, John Perry Barlow, who became an Internet guru. Writing in Wired in 1994, Barlow posited that in the information economy, “the best way to raise demand for your product is to give it away.” As Barlow explained to me: “What people today are beginning to realize is what became obvious to us back then—the important correlation is the one between familiarity and value, not scarcity and value. Adam Smith taught that the scarcer you make something, the more valuable it becomes. In the physical world, that works beautifully. But we couldn’t regulate [taping at] our shows, and you can’t online. The Internet doesn’t behave that way. But here’s the thing: if I give my song away to 20 people, and they give it to 20 people, pretty soon everybody knows me, and my value as a creator is dramatically enhanced. That was the value proposition with the Dead.” The Dead thrived for decades, in good times and bad. In a recession, Barnes says, strategic improvisation is more important then ever. “If you’re going to survive this economic downturn, you better be able to turn on a dime,” he says. “The Dead were exemplars.”

So maybe there's more in common between open source software and psychedelic rock than is obvious at first glance.  Deadheads, feel free to check out some photos and videos from last year's appearance of The Dead at Shoreline.

Note: I've also posted a version of this story at GuitarVibe.com

I have a good friend who recently wrote a book about what he learned in twenty years of consulting practice. He printed 5.000 copies, each copy costing him $15. The book costs $50 at the shops. He carefully placed it at airports and well know libraries. But he had no intention of making any money by selling the book. Instead, he is sending it for free to selected readers (he has given away +700 copies so far). It is a rather thick book which contains all that he thinks he knows about consulting. People receive for free something that they belive that is worth $50. Twenty people hired his company last year because they had liked the book, and this way the author did two million dollars in revenue and five hundred thousand net profit last year by selling consulting services with a very small company with no salesmen.