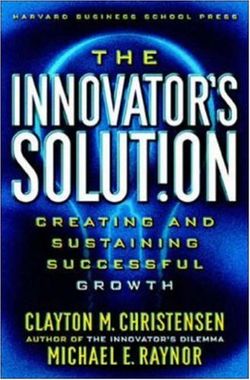 I'm an advisor, investor and board member to several startup software companies including Revolution Computing, Pentaho and most recently Erply a new Software as a Service (SaaS) company.  One of the common threads I look for is the opportunity to disrupt a large market.

One of the things that made MySQL successful was its use of open source technology to disrupt the multi-billion dollar database market.  In Silicon Valley, people often talk about disruption, but usually what they mean is they have some new feature or a new way to do things that is 10x faster or 10x cheaper.  Those are good things, but that's not necessarily sufficient to make a business truly disruptive.

The classic disruption model as defined by Clayton Christensen comes down to 4 important factors:

If you have all of those things, then your business could be disruptive.  But typically many startup companies ignore the third point.  It's not enough to do something the incumbents don't do today, you want to do something that they cannot do, because it would hurt their existing business.

In the case of MySQL, the product targeted the underserved web developer market.  MySQL was not only a better fit technically in that area, but due to its open source model, it was a business that was unattractive to the incumbents. (Or it was, until it grew to beyond $100 million in revenue.  Now Oracle will leverage this force to compete against Microsoft SQL Server.)

There are plenty of great businesses out there that are not disruptive; perhaps you're creating a new market, or you're introducing a new innovation that the incumbents have not discovered.  Disruption isn't the only strategy, but if you can make your business disruptive, you gain a significant advantage in the market place.

And disruption continues in the web spaces as high-scale and hope-to-be high-scale deployments have new options like HBase and Cassandra. MySQL is the incumbent and must improve to remain competitive.

But in the classic model of disruption, it's about serving the under-served with a more convenient, easier offering. Is that the case here? Also, is there anything that would prevent the incumbents (MySQL, Oracle, IBM, MSFT) from offering similar products?

It's not to say these aren't significant innovations or that they don't represent valid business opportunities. But it is not clear these are disruptive as described by Clayton Christensen.