Dennis On the Road to Recovery 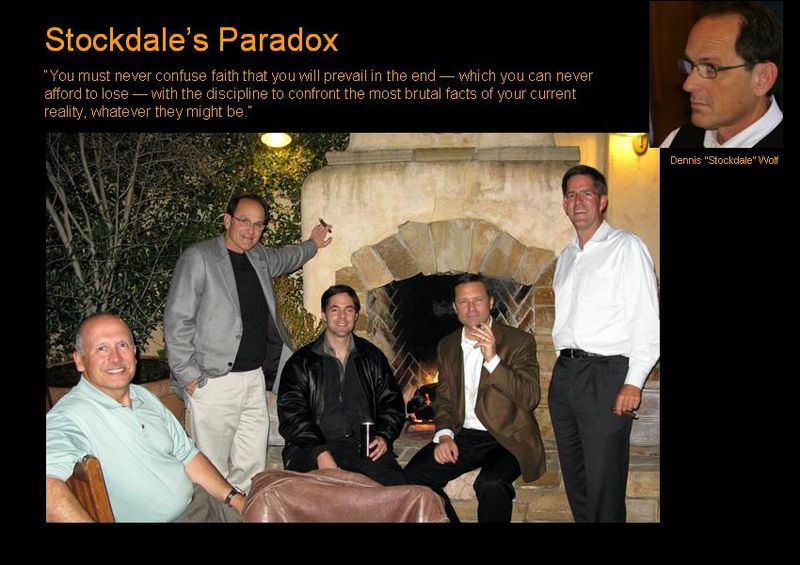 Dennis Wolf, former MySQL CFO, has been undergoing Plasmapheresis treatment in the last week and despite a mild setback due to an infection, he will be checking out of the hospital today to continue rehab as an outpatient.  Dennis reports that he has increased mobility in his leg and that the test for Devic's Disease and Multiple Sclerosis has come back negative.  So there's a bit of a mystery as to what has caused this NMO flareup, but the fact that it's not Devic's disease is good news as it means a recurrence is less likely.

Dennis will be continuing treatment as an outpatient for the next several weeks and will also be getting a second opinion from the experts up at UCSF.

Marten Mickos put together a couple of nice posters that were hanging in Dennis' hospital room including the one above featuring the MySQL executive team (known informally as the 4th Box Club) and a quote from James Stockdale:

“You must never confuse faith that you will prevail in the end — which you can never afford to lose — with the discipline to confront the most brutal facts of your current reality, whatever they might be.”

Dennis, we are thrilled to hear of your progress!

Feel free to add your comments for Dennis below.

Dennis, this is great news! I hope you'll regain your full health. Have a swift recovery!

Thinking of you, Dennis. (By the way, this is probably the only time Zack will be nice to you; so figure out how to take advantage...)

FABULOUS NEWS! WE'RE SO HAPPY TO HEAR YOU'RE ON THE MEND!
Shelley, Kevin, Jenna and Jared (Jon's aunt, uncle and cousins)

Zack- thanks for keeping people up to date. I have had significant improvement in a matter of days- and while I have a long way to recovery- there is light at the end of this very dark tunnel!

Great news! We're all pulling for you.
All the best--
Laura, David, Mark & Brian
(Jon's aunt, uncle, and cousins)