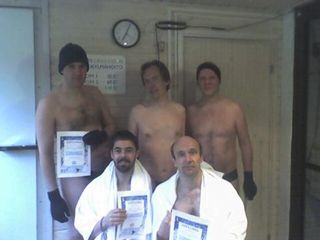 My good friend and open source-loving, running, beer-drinking community ambassador and MySQL VP Kaj Arnö (top row middle) has named me (bottom left) in the "7 useless facts" meme.  I don't mind.  I'd mentally prepared myself for this semi-fun semi-useless task when I saw Jay Pipes do this a few weeks ago.  I figured Kaj would fall soon and he would spread the virus, er fun, to me.

Here are the rules:

Ok, so here are seven semi-useless facts.  I am not sure if they are suitably "random" or "weird" or both.  They are not completely useless because they all have links to somewhere more interesting.  (Or at least that's my goal.)

Ok, I hope that was moderately useless information.  And now I nominate the following good fellows to carry on this semi-useless factually quest.  (Sorry guys! Feel free to just make stuff up. I'm pretty sure that's what Kaj did.)