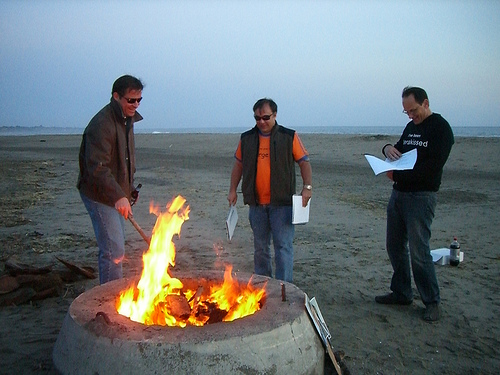 At the MySQL Conference & Expo this week, Marten Mickos showed a slide in his keynote presentation of a recent ceremonial "S-1 burning" that took place on the beach in Santa Cruz.  The S-1 is the document filed when a company goes public with the SEC.  MySQL put a lot of effort into preparing the S-1 and getting ready to go public over the last year or so, working with auditors, creating the prospectus, lining up the bankers, the lawyers and all of that.  We were literally weeks away from filing when Marten had his dinner with Jonathan Schwartz who asked about acquiring the company in late november.

So the S-1 burning was a little bittersweet especially for CFO Dennis "the fox" Wolf (right) and VP Finance Jeff "in socks" West (middle) who had put so much time into the preparation.  Also the photo shows how meticulous Dennis is since he's giving the numbers one final review before tossing them onto the fire!

But now that we are part of Sun, we won't look back.  Burn, baby, burn!