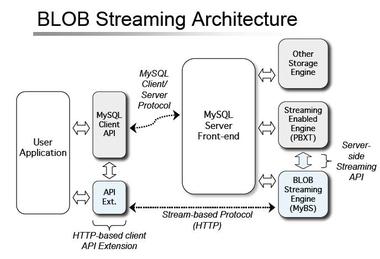 There are two recent updates on the MySQL storage engine front worth looking into.  Paul McCullagh over at PrimeBase has updated their BLOB Streaming engine MyBS. (Ok, some people like the name, others don't.  I suggest going for something more serious sounding.)  The engine itself is pretty cool.  It'a not really a general purpose engine, but the idea is to be able to store BLOBS of any size and stream them directly into and out of the database.  Ideally, any engine could use the BLOB repository and streaming API. Paul got a good reaction at his MySQL Camp presentation in New York a few weeks back and is eager to get feedback.  One concern: will the limitation of 4 Zettabytes be enough? ;-)

Jim Starkey and his team have also put out a new updated Alpha release of the Falcon engine.  This is still early stage, but worth trying out if you plan on deploying modern multi-core hardware with lots of memory.  For those who don't know, Jim is one of the pioneers in database technology and he invented BLOBs and MVCC some years back.  There are some pretty cool innovations in Falcon for minimizing lock contention which should provide very scalable performance for web applications in particular.  Falcon will be part of the MySQL 6.0 release available in 2008.  There's a series of technical articles Robin Schumacher has written on "Understanding Falcon" Part 1, 2, 3.

Cool to see so much innovation happening in and around MySQL.