Marc Fleury Has Left the Building 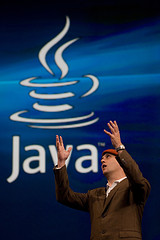 I suppose it was no surprise that Marc Fleury, founder of JBoss would eventually leave Red Hat after selling his company last year.  Marc was a classic enterpreneur full of enthusiasm, bravado and, yes, ego.  But as they say, it ain't braggin' if you done it.  He built a successful open source project that changed the game for J2EE app servers and turned it into a rapidly growing software organization, now solidly part of Red Hat.

Above all else, Marc Fleury is passionate.  Here's a former french paratrooper with a PhD who in the early days created a rival JBossOne party in the shadow of Sun's JavaOne. On a bet he ran a marathon in China with his partners. He dressed up as the Joker at TheServerSide Java symposium.  And somehow, he never lost focus and managed to ship a continuous stream of great software.  More importantly, Fleury legitimized the notion of "professional open source" and made it a safe choice not only for developers but for mission critical IT applications.  Fleury is no shrinking violet though.  He took on BEA and IBM and he was willing to speak his mind, even if he pissed off a few people along the way. Ok, maybe more than a few.

Despite Fleury's sometimes, ah, colorful antics, he's proven himself smarter than the average bear when it comes to understanding the evolution and dynamics of the software industry.  He is dangerously smart.  He built a sustainable organization that continues on without him.  And he took care of his team.  Under the direction of Fleury's lieutenant's Shaun Connolly and Sacha Labourey, JBoss is now integrated into Red Hat and the business is growing more rapidly than ever.  As Fleury said in an official statement:

"Open Source is a tsunami that is transforming the software industry in its wake and its inevitability is now well beyond challenge or the force of individual personality."

JBossOne?  It sure did.  JBoss won, Red Hat won and open source won.  Good on ya Marc!