25 Year Anniversary of the IBM PC 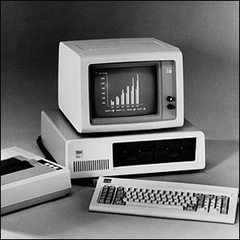 Last Saturday was the 25th anniversary of the IBM PC.  For those who were into computers back then, this was a huge legitimization of the microcomputer.  Until that point, there was no big vendor involved.  The Apple ][ was successful and spawned the first "killer app" with Visicalc, and there were lots of hobbyist machines running CP/M or weirdo home grown operating systems.  But it wasn't until IBM's entry into the market that things really took off.  Don Estridge, led a team from Boca Raton to develop IBM's entry into the microcomputer market with a charter to go outside and use industry standard components, rather than work within IBM's own bureaucracy.  The result was faster time to market and the implementation of a de facto open industry standard.

I bought an early IBM PC, stripped down to a minimal configuration, so I could buy third party floppy drives, memory and a graphics card.  It wasn't my first computer (that was the venerable Apple ][) but it was a good machine with a keyboard you could actually type on.  Back then we measured CPU speed in megaherz rather than gigaherz and the PC had an IBM 8088 CPU running at 4.7 mhz clockspeed.  The floppies held 360K each, so the net result was that the IBM PC had a performance boost compared to other computers of its era.

One thing people tend to forget is how much the IBM PC helped ignite the intrest in "freeware."  Guys like Andrew Fluegelman pionneered the concept and soon there were hundreds of shareware and freeware programs available as alternatives to the high-end commercial software packages. Sure they didn't do everything, but they were in many cases "good enough."  And eventually companies like Borland, PaperBack Software and others came out with high quality software at affordable prices.  Those were fun times.