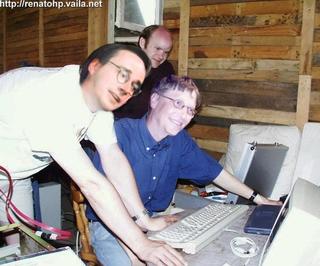 Sources inside Microsoft have reported the company will be expanding their commitment to open source by joining the Open Source Development Lab (OSDL) next week at LinuxWorld in Boston.

This appears to be part of a new strategy led by Steve “No Socks” Sinofsky, who has recently been appointed as Senior Vice President of all things Windows, taking over from long time exec Jim Alchin who was planning on retiring when Windows Vista shipped.  Or perhaps even sooner, based on the fact that his desk is now in the sub-basement of Building 10 next to the vending machines.  “Jim has been a team player,” Sinofsky said in an interview last week.  “On the losing team, that is!”  Sinofsky said that he had learned much in his career from Bill Gates when he was his technical advisor. “Let’s just say, I’ve got more than few emails and photos that could be pretty interesting to Melinda.  I’m just glad Bill saw things my way on some of these, ah, technical issues.”

According to insiders, Bill Gates will be working closely Linus Torvalds of the OSDL to open source the next generation of Windows Vista, previously codenamed Longwind.  Microsoft employees have speculated that Vista was unlikely to ship in 2006 due to changes in the specifications.  Since open source developers don’t have specifications or schedules, the idea was that further slippage would go unnoticed.  “Vista could just be a set of RPMs in some further version of Linux, perhaps in late 2007 or even 2008,” commented Buzzy Berkeley from the Goiter Group, a leading market research firm and escort service.  “Having cool 3D animation on the Linux desktop would be awesome. Otherwise, what the heck is there for these new 64 bit processors to do?”

Microsoft Spokeswoman Avril Poisson would not directly comment on the story.  “This seems to be one of those rumors that comes out from time to time, like the one about the chemical research facility in Building 10.  I mean, not that that’s going on.  Oh crap.  Forget what I said.  If I get quoted on this I’m dead.”

While the delays on Windows Vista announced recently were not surprising, it appears to have caused a ripple effect within the corridors of Microsoft.  A week after the delay of Windows was announced the next release of Microsoft Office, codenamed Shoehorn, was also delayed.  “It’s weird, because it was on schedule when I was running it,” Sinofsky said.  “I told Allchin to take care of it, and a week later, it’s slipped by like 9 months.  I can’t believe that guy.”

Now apparently, other Microsoft groups are also planning on delaying their schedules.  The Microsoft SQL Server team which shipped SQL Server 2005, their first new version in 5 years, has decided that they would also delay until 2007, despite the fact that they actually shipped late last year.  “Technically, it’s true, SQL Server 2005 has already shipped,” said Bob Buglia, Executive Vice President of While Loops.  “But we’re thinking outside the box here.  We saw how much press the Windows and Office guys got by slipping, and that was really a wake up call,” he said.  “So we’re going to issue a service pack in the next couple of days that actually takes the server off the market for about a year or more.  That’ll give the team time to figure out how to port to Linux.”

Glad you enjoyed it!