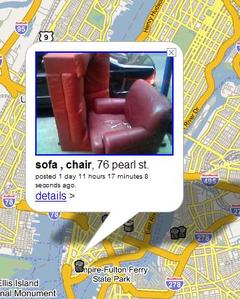 When we talk about the future of the web, we often think of web sites from the big guys, like Google, Yahoo or huge phenomena like the FaceBook, or NeoPets.  But open source is actually enabling a new generation of entrepreneurs and individual developers to create applications that are in some cases just garbage.  And I mean that in the best way possible.  Let me explain.

A few weeks ago when I was at LinuxWorld, Bill Hilf from Microsoft demonstrated a very cool site called GarbageScout.  If you haven't seen it, you really need to check it out; it's the perfect example of a Web 2.0 "mashup" that combines Google maps information with photos that people post of random garbage that has been abandoned on New York streets.  When I lived in New York 20 years ago, I was always amazed at what you would see people throwing out: furniture, art, musical instruments, antiques, various junk.  Now you can view it all in your browser.  GarbageScout also now shows the latest junk in San Francisco and Philadelphia too.

James Nachlin, the developer of GarbageScout built the site to encourage repurposing and recycling. After all, one man's junk is another man's treasure. More interestingly, GarbageScout is possible because of the repurposing of Google Maps blended with a MySQL database, some PHP code for the user interface, Perl scripts and JavaScript. James is a professional sys admin and he uses MySQL to communicate information through the email parser, the geolocator (that translates text addresses into latitude and longitude) and the web front end.

Without Google Maps or an open source stack, GarbageScout would probably still be just a dream. Ok, maybe not a dream, but you know what I mean. And in turn GarbageScout is licensed under the Creative Commons license.

I exchanged some further email with James Nachlin. The GarbageScout site runs on Red Hat Enterprise Linux 3, using a Linux 2.4 kernel along with MySQL 4.0. Originally James wrote most of the system in Perl (his favorite language) but later re-wrote some pieces in Java.

His primary motivation for building the site was his self-admitted fascination with garbage and the fact that he's cheap. He likes things that have a history and age to them and he likes the archeological aspects of garbage.