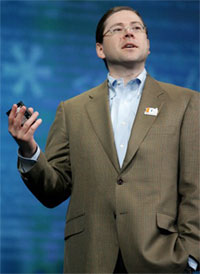 Jonathan Schwartz has been promoted to CEO at Sun Microsystems as co-founder Scott McNealy leaves the CEO post after 22 years to become chairman.  McNealy's colorful style sometimes put him at odds with Microsoft, Intel and other industry giants, and some accuse him of not moving fast enough to adapt Sun's strategy and workforce to the challenges of the post Internet boom of the 21st centry.  Rumors had been floating about McNealy's departure recently and despite negative comments around Sun's recent financial losses, overall this is a good move for Sun.

In the last few years, Schwartz has become considerable force inside of Sun, leading the charge of Sun's software strategy and their push to open source.  His promotion to COO was seen as a likely step towards taking over the reigns from McNealy at some point.  Now with the return of retired CFO Mike Lehman, the executive team will be in a strong position to make the changes necessary to return Sun back to a position of strength.

Sun has made a series of acquisitions in both software and hardware in the last couple of years and has launched a very successful line of high-performance Opteron-based servers.  Their move to open source Solaris, which would have been unthinkable a few years ago, has shown Sun is not afraid of making bold moves.  They've got the hot boxes and good open source roots, now they just have to execute on the strategy Schwartz and McNealy put in place.

He shares the name of a friend of mine who wrote Amazon's templating system.